I never thought I would run half a mile, let alone half a marathon! My daily fruit intake usually consisted of 5 pints of Cider, and I once spent 39 hours playing Call of Duty without stopping. As I said, I NEVER train! 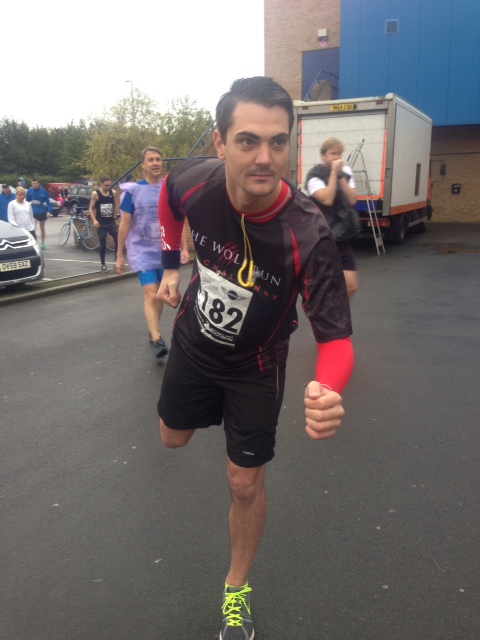 So after a beer or two and a chat with Mpuuga about his charity, I decided to try and do what I could to help! I had played football as a youngster, and 13 miles doesn’t sound that far………….

I decided to print off a 13 week training plan, which some friends of mine had recommended, saying “If you can complete that, the half marathon will be fine.” I finally started training as the plan hit week 8!

Training was going well, I was over the coughing and spluttering that 20 Marlboro a day for the last 10 years had brought me, and I was starting to get a good pace. During my training runs, I thought that anything sub 2 hours would be a huge achievement, and I was on pace to do it!

3 weeks to go – Injury! I don’t know if you have ever had Shin Splints, but they are inconvenient to say the least. Any pressure you put anywhere on your legs sends shooting pains up to your bum and down passed your ankle. In short, I thought that was it! I managed to get a 10 mile run in before the pain was too much, and had a decision to make. Either I pulled out of the half and gave myself time to recover, or I rested up and didn’t do anything for 3 weeks and gave it a go whilst relying heavily on painkillers and pink tape strapping my leg up!

The day of the run, I felt hugely under prepared! I hadn’t run for nearly 3 weeks, I could still feel the pain in my legs and I had spent the night before drinking beer with Mpuuga in my living room!

I can remember the start of the run, and the relentless rain battering down. I felt excited, but apprehensive of the 13 miles in front of me. “Just get round” I kept telling myself, and the determination to complete this kicked in. I started off at a slower than normal pace, and tried to get into a rhythm before the pain kicked in.

Mile 4 and I was feeling good – I had got up to normal pace, the rain was subsiding, and I had just had my first group of cheerleaders (Mpuuga and Amy) giving me support. I knew that we were on the way into Oxford City Centre, a run that I had done many times, and I was starting to enjoy it!

Mile 6 – the first view of my family! Claire, Caitlin and Olivia had persisted through the rain, and waited towards the bottom of theIffley Road. I ran over and managed to get a quick chat in, asking what the time was, and what the weather was doing, before Caitlin grabbed me and gave me a huge hug and said well done! Cheesy I know, but that gave me one hell of a lift!

Mile 7-8. Well, this is where it all went wrong! The painkillers started to wear off, and the back up tablets in my pocket had started to dissolve in the rain. My Kensio Tape had come off because it was so wet, and I was left with nothing. As I turned intoChristchurchand started the park run, I thought I might last to about mile 9 before I walked the rest!

Mile 10. Without doubt the worst mile on the course! All uphill, on concrete, alongside the dual carriageway. This was without doubt the toughest part for me, although that determination was there, and I was still running! I have seen some pictures of me at this point, and I look like a defeated man!

Mile 11 and the second of my encounters with Mpuuga. Now, when I saw him at 4, we high fived, laughed a little at the rain, and I was in good spirits. This time couldn’t have been more different. I wanted to stop, apologise and go home, but some encouraging words saw me through and after a quick blast of Frank Turner on the iPod, I was more determined than ever to get finished, and before I knew it I was approaching mile 13.

The thing that I found odd was that when I got to the mile 13 marker, I wasn’t finished! I had spent the previous 13 miles thinking that this marker signals a beer and a burger, but of course it doesn’t! The end though did come into sight and one last push would get me there. I picked out my iPod, got I Still Believe through my earphones and pushed on at the quickest pace I had done since I started!

Crossing the line was probably the proudest moment in my running career, and I am not sure that even if I do a full marathon I will beat that day. I managed the full course, without walking, in 2hrs 16 minutes. I know that it was a long way off my intended target, but I did it, I finished, and I hopefully did some good for Universal Chance in the process.

Phil ran for Universal Chance in Oct 2013 raising a fantastic £270.

Back to Get Involved